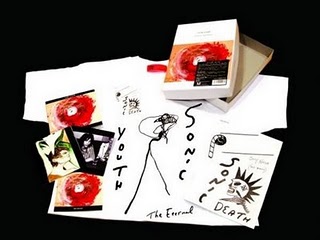 “Sonic Youth will release a Japan-only box set version of their new album The Eternal. The Eternal – Sonik Tooth Box will include the new album with two bonus tracks (taken from their Record Store Day split 7″s) and Japanese translations of the lyrics, a live CD taped at Battery Park, the Sonic Death ’09 zine, T-shirts by Toga Nejico, and a sticker. And judging from photographic evidence, a stick-figure drawing of a skull with a mohawk will be somehow involved, always a good sign. According to a MySpace blog post, the box will be out June 3 on Hostess, the band’s new Japanese label.”